Creating a multilingual form is easy with the 123FormBuilder web form builder, that supports multiple languages. These can be set up in your Settings – Translations section. This feature greatly enhances form usability as it helps you address users of different languages at the same time. The dropdown list containing languages shows up in the top-right corner of your form. Multi-language forms can be set up very easily and intuitively.

Translations are available on the Basic plan , but to use multiple languages on your forms, you’ll need to upgrade.

Once you have added a language to your form, you’ll need to type in the translations in the Customize language lightbox. To customize a language, hover over its line and press the Customize button. 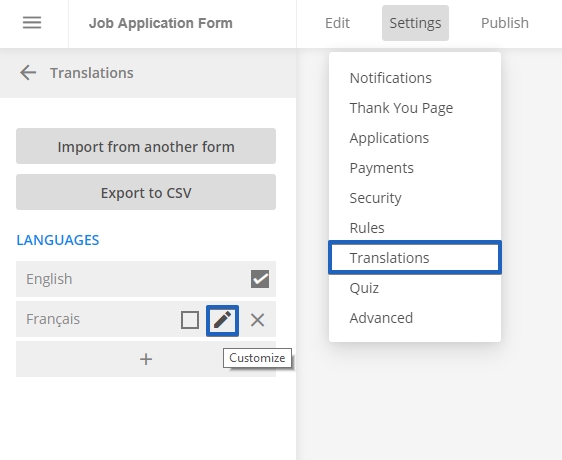 Some languages, such as German, Dutch or Spanish have built-in translations, but the majority do not. Each time you add a language, use the Customize button to translate the fields and the messages that appear on the form.

You can also customize your translations with HTML coding to change the style of the text from your web form. Read more on how to create multiple language forms. 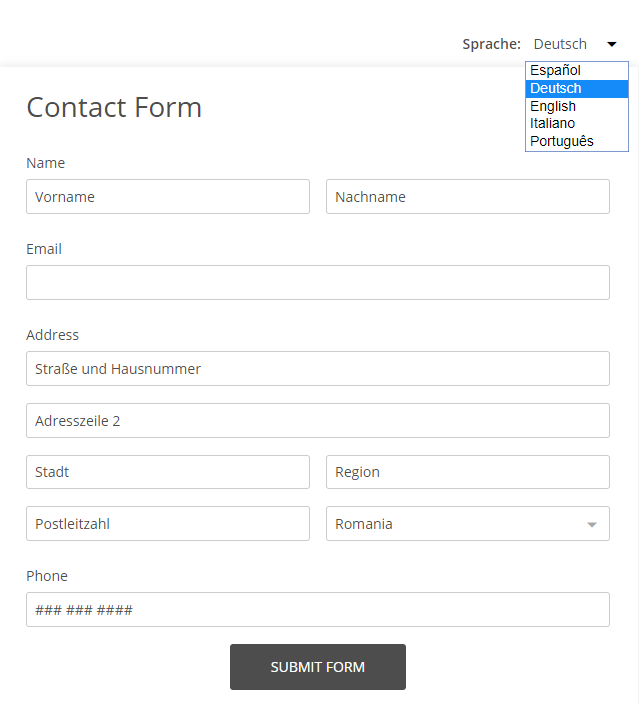 Here is a list of the most frequently asked questions. For more FAQs, please browse through the  FAQs page.

Is this service free?
Yes, we offer a free form builder service. Just sign up to the Basic plan and you are all set. This plan is forever free, but you are limited with a few features only, such as 5 forms per account, 100 submissions per month and you have to keep the backlink to 123FormBuilder on your forms. Check out our features matrix for more information.
How many forms can I create?
It depends on the service plan you are on. Higher service plans enable more features, including more web forms for your account. If you need more forms, go to the My Account section of your account and click the upgrade button. To create an unlimited number of forms, either upgrade to the Platinum service plan or higher. Consult our features matrix for more information.
How can I publish my forms?
You can publish your forms in many ways, by using their direct URL or HTML link, embedding them with a JavaScript code, Inline HTML or iFrame, using the Facebook app or the WordPress plugin, using popups, the Blogger code snippet and many more. Once you have created and customized your form, go to the Publish section to complete your work. Read more in our documentation.
How do I change my form design?
You can change the design of your form in the Themes section, which is located in your form settings. We offer a set of more than 30 predefined form themes for your forms, but you can also create your own from scratch. You can customize the submit button, the logo and more. To apply your own stylesheets, all forms come with a custom CSS editor.

Can't find what you're looking for?